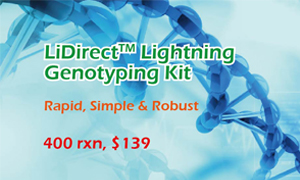 "I have been using the ExSembly™ Cloning Master Mix for two years and have had great success in cloning a wide range of DNA fragments using this mix. The product is extremely easy to use and makes cloning a very quick process. It is especially ideal to clone multiple DNA fragments simultaneously into a vector. Compared to other approaches and commercial kits I have used in the past; this product's efficiency is very impressive. I highly recommend the ExSembly™ Cloning Mix."

"ExSembly™ Cloning Master Mix works very well in my hands for almost two years. It has similar or higher efficiency compared with other assembly kits!" 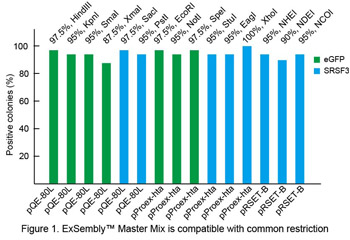 ORFs of eGFP or human SRSF3 were PCR-amplified and assembled into vectors (pQE-80L, pProex-hta, pRSET-B) using ExSembly™ Master Mix. ~200 ng vector DNA was used in each ExSembly™reaction. ExSembly™products were purified using a DNA mini-spin column and transformed to DH10B electrocompetent cells and plated on LB/Ampicillin plates. Forty colonies were picked from each reaction to perform colony PCR screening. Percent positive clones are shown in Figure 1 for each of 15 common restriction enzymes.

Comparison between ExSembly™ and Competitor N

Objective:
To compare the efficiency of assembling a single 684 bp PCR product with a 4852 bp vector.

A. Vector preparation using agarose gel electrophoresis. 3 μg of pQE-80L DNA was digested with FastDigest Kpn I (FD0524, ThermoFisher) and Fast Hind III (FD0505) for one hour in a 37 °C water bath. The digested DNA was resolved on a 1.0% agarose gel and purified using a standard mini DNA purification spin column protocol. The vector DNA was eluted in 50 μl ultrapure water. The concentration of the vector DNA was adjusted to 30 ng/μl.

B. Vector preparation using DNA spin column. 3 μg of pQE-80L DNA was digested with FastDigest Kpn I (FD0524, ThermoFisher) and Fast Hind III (FD0505) for one hour in a 37 °C water bath. The digested vector was purified using a DNA spin column following a standard protocol and eluted in 50 μl ultrapure water. The eluted DNA was adjusted to 60 ng/μl.

Transformation of the assembled DNA to E.coli

The assembled DNA was purified by using a mini DNA spin column and eluted in 50 μl of ultrapure water. 2 μl was used to transform 20 μl DH10B electrocompetent cells. The cells were transferred to 1 ml of SOC medium and incubated at 37 °C with shaking for 1 hour. The cells were then harvested by centrifugation at 7,000 g for 1 minute and plated on LB agar plates containing 100 μg/ml of ampicillin. The plates were incubated at 37 °C overnight.

Colonies were screened by colony PCR using the primers listed above. The positive control was pMax-GFP; no template DNA was used as a negative control.

* Estimation based on percentage of fluorescent colonies/ total colonies.